After receiving my bachelor’s degree at Indiana University 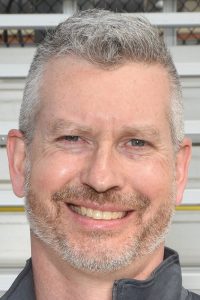 (1994), I decided I had no clue what I wanted to do with my life.  I had always been involved with athletics and really taken an interest with health and fitness during my time at IU.  So, In 1995 I received my certification as a Personal Trainer with the American Council on Exercise.

My first training job was at Bally Total Fitness.  During that time, I also worked as a Strength Coordinator for Ron Golden’s Baseball School developing an off-season workout program for baseball athlete’s.  I did this for several years.  I also worked as an independent trainer for a company called the Total Fitness Institute, Inc. (yeah, I had a lot of part-time gigs).

While at Bally Total Fitness, I founded and incorporated Fitness Planning Consultants, Inc. in 1998.  After four years, I finally left Bally’s and went full time with my new personal training business on January 1, 2000.  I wanted to start the new millennium off right.  To help my strength coaching experience with athletes, I accepted the Assistant Strength and Conditioning Coach position at Columbus State Community College in September 2000.

I didn’t stay there long because I was offered a Head Strength and Conditioning position at my old high school, Columbus Academy, in March 2001.  This laid the groundwork for fine-tuning my training methods for athletes.

During my time at Columbus Academy, my work with the teams helped produce the following results:

My research and experience with the Columbus Academy teams helped to lay the foundation for the speed and strength program I have created to train my current athletes with.

After several years of doing personal training in people’s homes and renting space at local gyms, I finally, in June 2003, opened up Sports Conditioning Specialists.  A private training studio that improves athletes’ speed and strength, while helping weight loss clients safely and permanently lose weight and keep it off.  In September of 2009, I closed Sports Conditioning Specialists and consolidated my training business to the Dublin location.  We are now Fitness Planning Consultants, Inc. once again making a positive change in people’s lives.

I received my next certification in February 2003 through the United States Weightlifting as a Sport Performance Coach.

In February 2013, I took a test through USA Track and Field and now I’m a USATF (USA Track & Field) Level 1 Coach.  This certification has helped with our sprint knowledge and in performance training not only in track, but for combines as well.

Not that I want to continue getting certifications, but in 2016 I received the Certified Speed & Agility Specialist through the IYCA.  It’s a growing company and I thought it would be nice to have.

As of November, 2017, I have been named the Head Boys and Girls Track Coach at Bishop Watterson High School.  This is a great opportunity for me and I’m really excited about helping these young athletes accomplish their track and field dreams.

In 2021, we had a really great track team at Bishop Watterson and we accomplished the following:

Our facility has helped many athletes accomplish a lot of their personal goals.  Whether they are looking to make a team, start for their team, or really see a lot of success, we are there to help them out.

The company that I created has also helped many individuals accomplish their personal health and fitness goals.  I’m just as proud of them as I am our athletes.  People who are/have obesity, arthritics, diabetics, general health, osteoporosis, pregnant females, lower back pain, hypertension, lowering cholesterol, people with MS, fibromyalgia, athletes looking to get stronger and faster, weekend warriors, and all people inbetween.  We really do a great job here and value YOU most importantly.

Currently, I’m trying to create a program specific to men over 40.  I am now a male older than 40 and there are a lot of things we need to be aware of to remain healthy.  I’ll keep you posted once this is established.

Nothing pleases me more than seeing someone bring in old clothes that they can’t wear anymore because they are too big.  Or reading about the athletes we worked with in the off-season in the local paper.  We are equally as happy about your successes as you are.

I have been a contributing writer for http://stack.com , http://thedietchannel.com, and an Expert author at http://ezinearticles.com.

I am also open for speakings.  I have been a speaker at the following events: