The football season is a little over 2/3 complete and St. Charles is a solid 5-2 as they look to be the top dog in the CCL.  Something they haven’t been too familiar with. 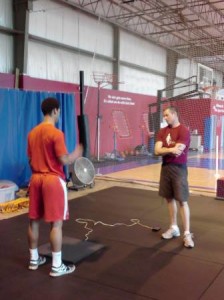 Ben Hale (on the right) resting before Adam tests him on his vertical jump.

That was illustrated last week when they beat DeSales 36-0, securing their first victory against the Stallions in 36 years.  36 years.  That is almost my entire lifetime.  That means guys I know who went to St. Charles when I was in high school went winless against DeSales in football.

One of St. Charles key football players in their victory against DeSales was Ben Hale, someone I’ve worked with since he was 8 years old.  This past spring was the last time Ben and I trained as I helped get him prepped for Summer combines which inevitably earned him a college scholarship to Bowling Green.

In the game, Ben was able to score an end of the half touchdown reception.  But, Ben’s primarily on defense as a safety and scored a big play stripping the quarterback and running it back for a touchdown.  I’m sure he was pretty excited as he ended up getting a picture in the paper and a quote.

Right now, St. Charles is in a position to make the state playoffs.  Get a win over rival Watterson and another victory and it might just secure them that playoff spot.  Is your team going to be able to knock them off.

Recently, speed training and fitness expert, Adam Kessler, asked for his followers/blog readers to send him questions they had regarding speed/sport training, fitness or whatever, really. The questions varied. To see the Q & A’s from this Columbus, Ohio, trainer, click here: Speed And Fitness Experts Q & A

As a speed training and strength coach, Adam Kessler, realized, fairly early on, that athletes need to be disciplined. Now, as a parent, he is able to compare the two to some extent. Kids and athletes alike, need to earn a parents and/or coaches respect in order to receive respect. Some athletes (and children) can be looking directly at you, yet not “hear/see a thing you just said/did!” Do you say/do a repeat or just chalk it up as their loss? For further comparison from this Columbus, Ohio coach and parent, click here: Coaching And Parenting Similarities

You may be one of the many young athletes that has a dream to one day play a sport in college. Speed trainer, Adam Kessler, of Columbus, Ohio, has worked with many athletes of all levels, from professional to little league. If you have the potential to play beyond high school, you may want to consider seeking out specialized speed training that may help you to be a better athlete. There are a few other things to work at to possibly help you obtain that scholarship. Click here to see these recommendations: Obtaining An Athletic College Scholarship

Participating In One Sport To Get In Shape For Another

Are you, or do you know an athlete that “plays this sport to stay in shape for that sport?”  Adam Kessler, a speed trainer, takes a look at how this may or may not help you out. You should look at the sports being played and consider whether they work your cardiovascular in similar ways and/or if it’s the same type of muscle fibers involved. To read more from this Columbus, Ohio, trainer, click here: Participating In One Sport To Get In Shape For Another

Are you looking for a good speed training coach? You should look for a training program that has high standards for a quality program. To hopefully eliminate you wasting a lot of money (and time), Adam Kessler of Columbus, Ohio, provides tips to assist you if you are looking for a trainer to help get you faster. Adam suggests you look at the trainers credentials; their experience; whether they do an individualized program or “cookie cutter”; do they have past client testimonials; do they look at running form? To read more if you are in the market for a speed training coach, click here: Finding A Good Speed Training Coach

With talk of many professional athletes praising the benefits of a gluten free diet, speed trainer, Adam Kessler did some research to see how it could potentially benefit your performance. A small percentage of individuals that are on a gluten free diet, have a medical condition, such as celiac disease, that warrants it necessary for them. Those that don’t have any such medical condition, state the diet makes them feel better in general. It is a healthier diet and eliminates many of the processed foods in a persons diet. To read more from this Columbus, Ohio trainer, click here: Do Athletes Need A Gluten Free Diet?

As an athlete, you know it can be tough to recover, not only for a tough game, but also an intense practice/work-out. Did you know that massage therapy is one of the best ways to recover? The Florida Seminoles football team has been utilizing massage therapy the past couple of years. Their head athletic trainer feels this practice has helped with the teams recent success. The practicality of young athletes getting regular massages may is slim. However, you can utilize a foam roller to help loosen muscles and break up the lactic acid quicker. To learn more about massages and foam rollers benefits, click here: Quicker Recovery For Athletes

If you’re a football player and have some talent, you need to look into Football University (FBU) Top Gun Camp. This camp is for the top 15% of football players in the nation for their age group. FMS (Functional Movement Screen) certified trainer and speed trainer, Adam Kessler, was contacted by Dr. Robert Ruffalo (also FMS certified) to help conduct screenings for the 2013 camp being held at Jerome High School in Dublin, Ohio. Along with 2 other Columbus, Ohio, FMS trainers, the 4 screened 72 of 700+ high school players last Thursday and will be screening middle school players today. To read more about this camp and how the athletes did, click here: Best Football Camp You’ve Probably Never Heard Of