Is Staying Hydrated More Important
Than Speed Or Strength Training

I want to share with you a quick story.

I was playing in a flag football tournament several years ago on a hot Father’s Day.  The sun was out and it was probably in the mid-80’s.  I thought I brought plenty of liquid.  2 32-ounce items of water or some sports drink (I can’t remember what it is) and a 16 ounce item.

We ended up winning the first game, losing the second, and we were bounced from the tourney.  I finished all my drinks by the end of that second game and I just wasn’t feeling right.  I felt sluggish and not real nauseous, but not great.  If I would have played a third game, I probably would have passed out.

I lived 15 minutes from the park where the tournament was played at.  It was all I could do to keep my concentration on driving.  I was trying to control my breathing cause I felt like I was going to throw up.

Finally, I couldn’t take it any longer and stopped at a Speedway.  I at least needed to rest, but instead purchased 2 32-ounce bottles of their cheapest sports drink.  I stayed in my car and sucked both bottles completely dry in 10 minutes.

THAT IS 4 POUNDS WORTH OF SPORT DRINK!

It was like I was hit with a jolt of adrenalin.  I felt tons better.  Got my senses back to normal and felt fine driving home.  Once I got home, I continued to drink water and eat so I could do the recovery process.

So what did we learn from this little incident?

Noticed I mentioned impairing your athletic performance twice.  It doesn’t matter how great of an athlete is, if I’m not properly hydrated, I can’t perform at optimum levels and that just might be enough for my opponent to get the best of me.

As I’ve researched about proper hydration, I’ve come to realize that the sports drinks that are on the market aren’t all they’re cracked up to be.  They are the product of good marketing.  They are made up with a consistency that suggests they might help keep you hydrated, but some drop the ball. 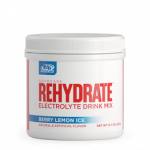 Advocare’s Rehydrate® will keep your hydration levels where they need to be.

After I was done researching and testing, I concluded what I really like is Advocare’s Rehydrate.  This stuff tastes great and does what it is intended to do – keep you hydrated.

Rehydrate provides the necessary nutrients to maintain a proper metabolism and delay the onset of fatigue.  It has a low glycemic index that produces a more gradual insulin response.  I feel some sports drinks out there taste to sugary and can cause a crash.  In fact, in my opinion (and just my opinion I can’t prove this), I feel that some of the popular sports drinks started tinkering with their ingredients as a result of what Rehydrate was doing.

Here’s why Rehydrate is such a superior product:

It really is a great product and I think you should at least try it once.  If you don’t like it, then send any unused portions back to Advocare for a refund.  But, I think you will be happy with your choice.

I recommend it to my athletes, but also to my family and friends.  It is good stuff.